Five days a week, Matthew Caron administers Silberman ten million dollar portfolio of externally funded grants and contracts. But every weekend, he puts on his paramedic uniform and joins the thousands of healthcare workers who provide lifesaving assistance to the city’s citizens. This work has become even more challenging as the city struggles to contain the COVID-19 pandemic. We asked Matthew to tell us about his weekend job. 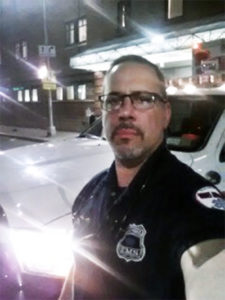 Where and when do you work? How long have you been at it?

MC: I currently work for the Maimonides Medical Center in Brooklyn as a 911 paramedic, and have been on staff since 2004. I became an EMT-Basic in 1984, enrolling in a paramedic program after 9/11 and began working on a 911 ambulance in 2003. My current workload at Maimonides consists of a double shift (16 hours) every weekend, beginning Friday night at 11:00pm and ending Saturday afternoon at 3:00pm. Until 2006, I also taught EMTs and paramedics as a NYS Department of Health Certified Instructor Coordinator.

Before the COVID-19 crisis, what did your typical calls entail?

How has this changed since the crisis began? What have been the most challenging aspects of the job during this time?

All of the above call types still occur, with Covid-19 exacerbating many underlying medical issues. All patient-facing encounters now require some measure of PPE (personal protective equipment), at least a surgical/procedural mask. Patients actively coughing or exhibiting signs and symptoms of Covid-19 also require the wearing of an N95 mask. Those patients identifying as having tested positive, or whose signs and symptoms lend themselves to this belief, require full PPE-gown and/or impermeable suit, N95 covered by a surgical mask, head covering and face shield. Patients in respiratory or cardiac arrest now require EMS personnel to don full PPE, delaying medical care for the most critical patients.

All of the above-mentioned PPE are in high demand and short supply, with EMS personnel often wearing the same mask(s) for days on end. The call volume has spiked by more than 60%, straining people and resources to their limits. To alleviate some of the burden on hospitals, EMS crews actively dissuade non-critical patients from being transported. Patients can only be brought to the nearest hospital and cannot be accompanied by a family member or friend. Even if a family member accompanies the patient, hospitals will not allow them in the emergency department. Changes to required staffing is being considered to increase the number of available ambulances. EMS personnel have never had a “lunch hour”, but there was typically downtime between assignments. That is no longer the case. Hospitals are utilizing every inch of interior and exterior space to maximize triage and treatment. This is reminiscent of the post-9/11 days but with no end in sight.

How do you cope with performing such a dangerous and potentially traumatizing job, especially during this most challenging period?

Over time you build a layer of emotional callous that blunts the effects of what you’re experiencing. You see something once, twice, ten times and its ability to shock you is diminished. What’s happening now is greater in magnitude, with resources stretched more than I can remember. How people ultimately get through this will be seen through the lens of hindsight – a hazy, kinder view of actual events. In the moment you get by knowing that you’re doing what you can with what you have. Hopefully that’s enough to get you through the day.

What, if anything, have you experienced during the last couple of weeks that gives you hope for the future of the city?

The ability of New Yorkers to step up when called on to do so, in big ways and small ways.